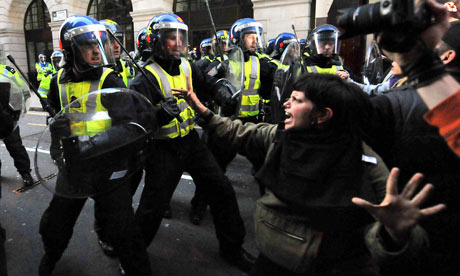 The Regime in London, in an inhuman attempt to maintain power, stability, lives and property, and prevent mobs from taking over large swaths of the country, sent its security forces to battle “innocent civilians”.

It is clear that the rioting peasents simply wanted freedom, and to spread the enlightened youthful Arab Spring to the dark continent of Europe, ruled by older and wiser men.

It is imperative, that Obama form an alliance (leading from behind), fronted by France of course, and launch a halphazard and confused bombing campaign on London to kill its soldiers, police officers, and of course PM Cameron’s grandchildren and son. Thousands of people must be bombed to death, in order to save the lives of the “innocent civillians” who are trying to destroy and pillage london in the name of various things, none of which are (and which the media must call) freedom.

We must call on the EU, the UN, the Arab league, the World Bank, the IMF and Green peace to immediately order NATO forces to attack London, and the UK regime which apparently is hell bent on retaining power through the use of force by its security forces.