The Cost of Deporting America’s Illegals

Responding to a question on social media, I briefly addressed this issue, and reproduce it here. Namely the issue of the cost and economics of the well known campaign promise by Donald Trump to, as President, expel the 12 or so million illegal aliens currently residing within the USA. It is a very good question because once passed the inciting rhetoric of the issue, the media has largely presented the idea of deporting all or great part of America’s illegal alien population as physically and economically virtually impossible. As usual, this declaration is made a priori and without basis, to be accepted as fact. So, let’s take an actual look at the issue.

As a preface it must be stated that the cost is nearly irrelevant.

First of all, although I do not explain it here, nor have I fully elsewhere yet, I think this issue is the most important currently in the western world, and the execution of one of these deemed “impossible” or “unrealistic” demographic changes is one of the few hopes left to the western world. I will hopefully address that elsewhere. Secondly, cost saving calculations are somewhat meaningless when at the expense of the destruction of the state. It would be cheaper for Israel for example, as a small country, to not have such a relatively large army, but the cost savings don’t seem so attractive when compared to the fact that they would lead to a violent and quick end of the state. A different situation of course, but for illustrative purposes. Any potential cost savings or cost calculations of the issue have to be considered along with the effects of the issue itself more generally. 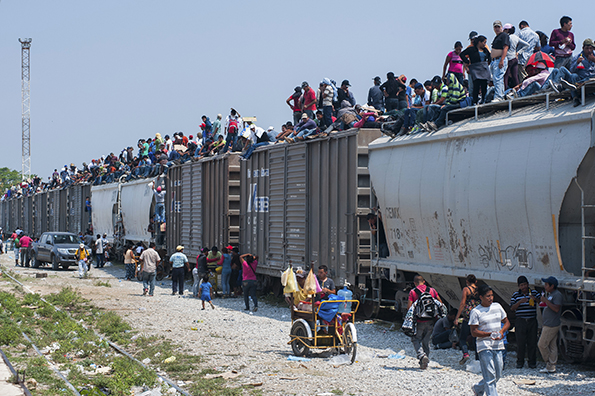 Central American migrants aboard “La Bestia” moving north through Mexico and aiming for the USA.

But those important issues aside, let’s take a look at cost calculations, for their own sake. This brief examination is far from precise, but should be enough to cast aside the idea that the deportations would somehow be prohibitively expensive. A very quick look leads us to some interesting studies. I assume they are likely very wrong, but again, they will serve for illustrative purposes.

First the cost; a study from the American Action Forum (the AAF), clearly against the proposal and trying to convey that it is in fact far too expensive, quotes the cost at 400 to 600 billion USD over 20 years.

Basically, it assumes simply continuing at the current top potential rate of deportations, without changing much else. This means a rate of expelling about 400 thousand people a year, a figure that was nearly reached in 2013 as is, according to the AAF. So first of all, that cost is not as opposed to “0”, it is basically in large part already the cost of the mechanism. But putting that aside, 400 to 600 billion over 20 years is peanuts for the federal govt. The stimulus packages, TARP and all sorts of stuff they constantly do cost far more in a single year. To put things in perspective, the budget of the Federal govt alone is about 3.7 trillion dollars a year!

So does it have some cost? Sure. It is far from too expensive, the cost is almost insignificant. And that’s by accepting the figures of a study that wishes to say it would be as expensive as possible. Of course if you read their study, you may fall trap to the bias tone they are attempting, but I have extracted their cost figures exactly.

The Economic Burden of Illegals

Now, the illegal aliens of course have a large economic cost to the budgets, federal, state and local, by virtue of not being expelled. So how much is that? According to another study, this one by FAIR, the annual burden on federal and state governments are $113 billion. So now when you compare the cost of expelling them at 400 to 600 billion, and the annual cost of not doing so at 113 billion, the expulsion makes sense even in purely financial terms (the burden cost every 4 to 5 years alone, that is without further growth of the illegal population or their rate of cost which actually both grow, is equal to the cost of the total one-time deportation), and as I said before, these are terms that are actually the least of the issue.

What about number of arrests? Let’s put it in perspective. The number of yearly arrests in the US has been consistently between 12 and 15 million since the mid 90’s or so. Every single year 12 to 15 million people are arrested. The number of drug arrests alone are a yearly 1.5 million. So every single year more people are arrested than the number of the entire illegal population (and not an insignificant part of those arrests to begin with are illegals who are subsequently not deported – in fact according to Chris Kirkham, over half the prison system’s yearly revenues go to immigrant detention centers). Can you imagine the cost for these? These are investigations, then arrests, prosecution, sometimes litigation afterwards, and then incarceration, probation and parole. All steps brimming with bureaucracy, auxiliary services and massive costs. There is a reason for the massive prison-industrial complex.

These arrests are massively more expensive than a mere deportation, and they occur in far larger numbers, every single year. So the task of expelling the illegal population, ONCE, sure is not tiny, but is no big deal either for the unfortunate size of the enormous government infrastructure that already exists.

And a final point for even further perspective. The AAF deportation study had the cost at 400 to 600 billion. Taking the midpoint, at 500 billion for 11.3 million people, is about $44,200 per person. Now, not only is the cost not a big deal for the federal government but it’s also a pretty insane figure to (even with the huge benefits of scale which are supposed to lower these figures!) simply grab an undocumented person and drive him back across the border. Governments aren’t the most efficient of people are they? But imagine simply offering $10,000 USD cash for all illegals who volunteer to show up, sign a waiver, get their money and volunteer out of the border. What about $20,000 ? You’d have them fighting each other to leave, and at half the cost that was put forward by the study.

Needless to say that has to be done only after a border is secure, otherwise it is a massive inducement for further illegal immigration (sneak into the US and volunteer to leave for 20k!).

Such a strategy also should make all the people who feel bad about this feel a little better. As a reward for your fence jumping border crossing efforts… here’s some cash, which is a fortune in a place like Mexico, and have a nice life.

So it’s not Expensive, What is the Problem?

So again, even if it was very costly, this is an issue at the heart of a nation’s ability to continue to exist, so cost calculations are secondary here, but even if they were not.. it is easy to see that such an endeavor is easily in the realm of the doable by strong determined leadership and some good management. The reason it is seems so unlikely is because we have been told for a long time that such a thing is crazy, impossible and even taboo to consider. So of course it’s impossible if no one wants to do it, but impossible for those reasons and not for others.

The success in making it taboo has been one the left’s greatest achievements, to all of our misfortunes. The thought conjures up visions of nazis. And it’s a disgrace. I really wish the nazis had strictly enforced their immigration rules and gently expelled anyone not legally present in their country back to their home (maybe with the additional $20k!) rather than brutally torture and murder millions of people (who were by the way, Legal residents of their home). And if you want to push the analogy to an extreme where it does not belong at all, I still very much wish they had deported 6 million Jews with their assets, despite them being legal residents, instead of murdering them (and stealing their assets).

It is an ironic sadness that the nazis through their unthinkable cruelty and evil as a last insult upon injury leave us (meaning their enemy, western countries) unable to defend ourselves honorably just because they did so dishonorably… and thus to yield to them a final victory over their opponents they wished to see overwhelmed and undone.

Deporting the illegal population of the USA is an endeavor filled with obstacles barring the way, but those are political and judicial, not physical, moral and certainly not economic. If it is the will of the people, with dignity and reason, to enforce their current immigration policy, the rule of law, and the integrity of their nation protected by strong borders, in order to ensure its survival for their posterity, then little could stop the world’s superpower to carry it out. On the other hand, failure to do so will ultimately destroy the people and its will.