At the Lighthouse, we frequently discuss the western world’s refusal (for example in this article on the recent palestinian UN membership bid) to understand what it is facing at the hands of the Muslim world. The cultural realities and oriental mentality are so different that the average westerner simply cannot believe what is most obviously in front of him.

As a common facet of human nature, people will project their own cultural values on others and view things through the lenses of their own perspective. Throughout history, this has time and again been a fatal error for nations.

This following video of an Egyptian “candid camera” type show where the hosts are playing a prank on Egyptian actors is extremely telling.

Of course, as a staged and produced show, one must always keep in mind that the producers of the show selected which of the actors to include in the video and which to exclude. Not all (if there was more) may have reacted like this. Some may have reacted better or even worse. However, far more telling than the individual actor’s reaction to the fact they are told they on an Israeli TV channel, is the fact that this show was aired at all. The hostess’ words at the end sum it up perfectly, “Who know there was such patriotism in Egypt?” and that “long live Egypt” since this patriotism is found everywhere in every-day Egyptians.  None of the actors ever apologize for their violence or rudeness after they are told it is a prank. In fact they are proud, which is why they agreed to have this footage aired (unless they were somehow tricked into signing previously). In Egyptian culture, they have nothing to apologize for… if you go around saying you are  a Jew, you will be beaten.

The slow-witted armed actor does not even apologize for striking a woman, but though he apparently now feels bad that he struck an Egyptian woman, he only tells her that she brought it on herself.

It must be noted that these two plump Egyptians who show such valor when facing “Jews” within Egypt, and would have them beaten mercilessly for no other reason than that they are Jews, would most likely behave no better than their compatriots in the Six Day War who when in the face of the IDF, could not run away fast enough and left thousands of sandals in the Sinai desert as they deserted en mass.  Others surrendered by the thousands. 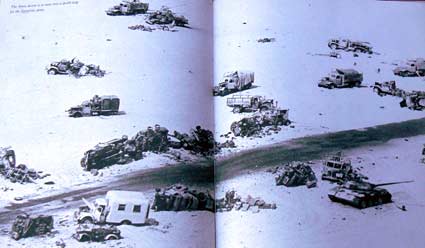 To translate this into western values, the following scenario will do. A prank is staged where the victim of the prank is spat upon in the face by one of show’s actors, and subsequently the prank victim strikes the actor in anger. Afterwards, when he is told that it was only a prank and he is on a hidden camera, the “victim” would not nor would be expected to apologize to the man he struck. Prank or not, when you spit in someones face, he is very likely to hit you.

By even pretending to have placed the actors in the presence of Jews and in an Israeli channel, the producers have done the unforgivable.  Also worthy of note is to realize that the people only regain “human” status in the eye of the pranked actors when it is realized they are Egyptian. When they are thought to be Jews, through absolutely no fault of their own, woman or man, they are less than human, worthy only to be beaten and killed.

Also of note is thought the left and the media continuously label all of Israel’s enemies as only anti-Zionist or anti-Israel, and NOT antisemitic (this also would be politically incorrect), the word used over and over by the aggressive and enraged actors is the Arabic “Yehud” for “Jew”. The term “Israel” basically only comes up when they are speaking about the channel and where the staff is from, but all the participants are enraged at their “Jewish” identity.

The armed actor hits the nail on the head when he explains that though the governments may have made peace, “the people have a very different idea”. This is precisely what I have attempted to explain on numerous occasions, that in reality, nations may be enemies of each other while the west believes that only dictators can be, and that turning your enemy into a democracy magically converts him to a friend.

And far more tragically, this is the “peace” that Israel purchased with the blood of her heroic soldiers who captured the Sinai peninsula twice from invading Egyptian armies… who defended its soil for more than a decade, and from the onslaught of the surprise attack of the Egyptian hordes during the Yom Kippur war.

In this previous article written at the start of the Arab Spring, Israel’s first Prime Minister Ben Gurion who returned the Sinai back to Egyptian control the first time (Israel has captured and withdrawn from the Sinai twice, as if its soldiers lives were a joke just as much as invading Israel is; which after doing so, everyone just presses “reset”) was quoted as:

Ben Gurion himself apologized on the air to the public that he had to leave the Sinai peninsula, not because he wanted to, but because he received two letters from the two great Super Powers threatening invasion if he did not.

Sinai, mostly empty of inhabitants, full of stunning natural wonders and beautiful beaches, with large amounts of oil and natural gas, vast deserts and the strategic and immense economic asset of the Suez Canal (built by British and Rothschild investment and stolen by Nasser) was handed over as shameful tribute for this wonderful “peace”. All in all, the peace Israel has enjoyed with Syria has been far greater than the one with Egypt throughout these  decades. There has been no quieter border than the Syrian-Israeli one. The difference is that to date, Israel retained the Golan Heights. Egyptian TV, though state controlled, has always been extremely inciteful and ant-Semitic. Of course, now that the Muslim Brotherhood has taken control of the government as I  predicted (a year and half ago), this will only increase. It is clear, the nearly 40 years of “peace” (absence of full-scale war) between Israel and the Arab states around her have existed for only reason only; the IDF.

Our shameful “land for peace” self-mutilation has not bought peace, but only shame and weakness. On the contrary of course, it has encouraged our enemies, but encouraged or not, they have not dared advance because they would run into Israel’s fighters.

One only has to imagine the IDF dismantled, to realize exactly what protection Sadat’s signature on the Camp David Accords would afford. And after all that sacrifice, the forceful expulsion of Jews from their homes, the vast territory handed over, the loss of Sinai, even that measly piece of paper that Israel endured it all for is now in jeopardy as the Islamist waves of the Arab Spring threaten to wash it away. When indians sold Manhattan to the Dutch for the infamous $15 in trinkets, they got a significantly better deal than Israel did for the Sinai.

Though the Sinai withdrawal was Israel’s first experiment with the “land for peace” formula (and unfortunately far from the last), and though it was a blunder of immense proportion, it seems we have learned little.  Perhaps this video can remind some in the western world that our enemies cannot declare themselves so any more clearly, and despite our mental acrobatics to evade this reality and wish them our friends, the nature of things remains that their limbs obey their minds and not ours.

Note from the Past

In this article on the palestinian UN bid, I illustrated this western refusal to accept a reality that is not politically correct:

many in the Western World equate “democracy” with “ally”, and that they refuse\ to face the reality of a people actually being an enemy of another people. Our modern Western values do not permit us to consider a people in general to be an enemy, but we blind ourselves at our peril to assume everyone shares those values.

Today as Westerners, we seem to need Bin Ladens, Saddam Husseins, Talibans, or any other “Dr. Evil” to justify our self defense. Iraq and Afghanistan can be “liberated” but not attacked or invaded and “regimes” can be enemies but never the people who live under them or support them.   The Israelis are often surprised at how the protesters throughout the Arab Spring are always portrayed by the media as peaceful freedom protesters yearning for democracy regardless of how many “Death to America” and “Death to the Jews” signs they hold up, regardless of how many flags they burn and how many embassies they destroy. Not even the well known footage of thousands of Palestinians dancing and celebrating in the streets after 911 can impact our well meaning western values. Freedom of Religion is another Western value (which Israel’s enemies ironically do not share) that also make it impossible for the West to name its enemy.